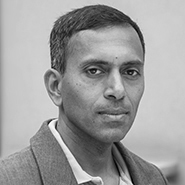 Title: Genome Sequencing For Disease Diagnosis: The Confluence of Biology and Computing

Biography: Dr. Ramesh Hariharan is the co-founder and CEO at Strand, and adjunct professor at the Computer Science department of the Indian Institute of Science (IISc), Bangalore. At Strand, over the last 15 years, Dr. Ramesh has lead teams building analytical tools for high-throughput molecular profiling; these tools are widely used and have been cited in several thousand publications. More recently, Dr. Hariharan and the team at Strand have been working on technology to make DNA sequencing for genetic disease diagnosis affordable in India. Dr. Hariharan’s research contributions in computer science include fast algorithms for several algorithmic problems. Dr. Hariharan is a recipient of the TR100 Award of Young Innovators by MIT’s Technology Review Magazine and in 2003 received the Global Indus Technovator Award from MIT, instituted to recognize the Top 20 Indian Technology Innovators worldwide. He is the author of a book on clinical genomics, called Genomic Quirks.
Dr. Hariharan received his B. Tech from the IIT, Delhi, his Ph. D from the Courant Institute of Mathematical Sciences, New York University, and subsequently did a postdoc at the Max-Planck Institut fur Informatik in Saarbrucken, Germany. After that, he served as a faculty member at the IISc before joining Strand.
Dr. Hariharan was recently inducted as a Fellow of the Indian Academy of Sciences. IIT, Delhi recognized him as the Distinguished Alumnus for the year 2015.

Abstract: The talk will describe the use of genome sequencing for diagnosing/detecting/treating genetic diseases and cancer. It will also mention the computational problems that lie at the core of this effort.

Genome Sequencing For Disease Diagnosis: The Confluence of Biology and Computing