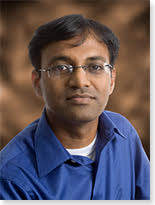 Abstract: The computer architecture community faces an important and exciting challenge. On one hand, Moore’s law is slowing down, stressing traditional assumptions around cheaper and faster systems every year. But at the same time, our demand continues to grow at phenomenal rates, with deeper analysis over ever growing volumes of data, new diverse workloads in the cloud, and smarter edge devices. Is the situation dire, or is this just another phase in the evolution of system architecture. In this talk, I will summarize recent technology and workload trends and discuss likely scenarios for the evolution of future system architectures, with a focus on large “warehouse-scale computing” environments. Specifically, I will discuss how responding to the current opportunities will require more “out-of-the-box” designs —considering the entire datacenter as a computer, co-designing across hardware and software, and developing new architectural constructs.

Bio: Partha Ranganathan is currently a distinguished engineer and technical lead for hardware and datacenters at Google designing systems at scale. Before this, he was a HP Fellow and Chief Technologist at Hewlett Packard Labs where he led their research on systems and datacenters. Partha has worked on several interdisciplinary systems projects with broad impact on both academia and industry, including widely-used innovations in energy-aware user interfaces, heterogeneous multi-cores, power-efficient servers, and disaggregated and data-centric data centers. He has published extensively, is a co-inventor on more than 100 patents, and his work has often been featured in the popular press, including the New York Times, Wall Street Journal., Times of India, etc He has been named a top-15 enterprise technology rock star by Business Insider, one of the top 35 young innovators in the world by MIT Tech Review, and is a recipient of the ACM SIGARCH Maurice Wilkes award and Rice University’s Outstanding Young Engineering Alumni award. He is also a Fellow of the IEEE and ACM. (URL: http://www.parthasarathys.com)